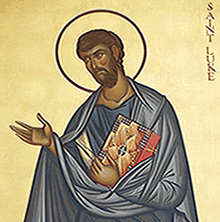 Saint Luke Parish was founded in 1961 under the guidance of its first pastor, Monsignor Louis Flaherty. It consisted of approximately 200 families from McLean and Great Falls in what had been the northeast portion of Saint John’s Parish, also in McLean. In 1961 the parish “rectory” was a split level house on Congress Lane in Broyhill Langley Estates, adjacent to the church property. It also housed a chapel and offices in the basement. The newly-organized Women’s and Men’s Clubs furnished the house and also provided liturgical vessels and linens. Mass was celebrated at local public schools – first Franklin Sherman then Churchill Road.

The first building to be constructed was Saint Luke School, built through a tithing program and with the expectation that a new church would follow soon. “Soon” took two decades! The school opened in September, 1962. Felician Sisters from Lodi, New Jersey, staffed four grades with a capacity of 50 students each. The priests moved out of the Congress Lane home and into quarters that now serve as the Saint Luke School offices. The sisters made Congress Lane their convent. Volunteer parents provided instruction for some 250 students in the CCD program. (There are about 700 today.) The first parish Confirmation and First Holy Communion celebrations took place in 1963.

Over the years the school grew from four grades to eight, plus a kindergarten with accompanying expansion of physical facilities. The gymnasium’s importance loomed large. In addition to normal athletic use, it became “the church.” Saint Luke parishioners attended Mass and other liturgical celebrations in the gym for almost twenty years.

The house on Congress Lane was sold and another purchased on Dead Run Drive to provide a rectory for the priests. The nuns moved into a brand-new convent constructed close to the school. As the staff of nuns dwindled, the convent evolved into the rectory and office complex it is today. The sisters shifted to the Dead Run Drive house. Ultimately the Felician Sisters were no longer able to furnish teachers for Saint Luke School. Today lay women and men staff the school.

The parish was divided in June, 1979. The Great Falls area became the parish of Saint Catherine of Siena.

Saint Luke Parish finally acquired a proper church with the dedication in 1983 of the structure that now houses the main church, the Blessed Sacrament Chapel and the narthex crowned by the striking bell tower. Father John J. Hughes, the pastor, supervised the design which is faithful to architectural and art guidelines published by the bishops of the United States to reflect the Universal Church’s self-concept that emerged from the Second Vatican Council. For more information about the Frank Kacmarcik, the architect of Saint Luke Church, please see the articles below.*

A significant expansion of the church occurred in 1990 with the completion of Bishop Flaherty Hall to provide a place for members of the parish to celebrate weddings and anniversaries, to gather after funerals, to hold meetings, to hear lectures and to engage in all other group activities of a faith community.

The Flaherty Hall expansion took place under the direction of the Pastor, Father J. Stewart Culkin, who initiated a significant fund-raising drive to accomplish it. This effort also supported the installation of the large mosaic with the statue of Christ the High Priest gracing the wall behind the altar, the stained glass window, the triptych and icon in the chapel, an interim pipe organ and several other projects.

The era also saw a significant effort to enhance the spiritual life of the parish and encourage the sense of community. The Renew Program brought about the creation of small faith study and discussion groups that met in the homes of parishioners. This tradition continues today especially in the form of small Bible study groups.

These developments followed on the heels of the expansion of Saint Luke School to include a kindergarten and library wing and the introduction of programs in computer knowledge, Spanish, French and remedial and special education.

The last significant addition to the main church fulfilled a goal established during the initial design of the church in 1977. That goal was to grace the church with a magnificent pipe organ. Designers looked forward to a state-of-the art instrument that would enable musicians to explore the full range of sacred music that is an integral part of the liturgy of the Catholic Church – music to enliven spirits and unite people and Creator in new and deeper ways.

Under the leadership of Father Martin McGuill, pastor, another substantial and successful fund-raising effort went forward resulting in the dedication in 1998 of the Steiner-Reck Opus 104 pipe organ. This 61-rank instrument is the largest pipe organ in Northern Virginia, and the focal point of a considerable community music program in addition to its liturgical role. The Washington Post has described it as “a miniature cathedral of copper and chrome,” its visual appearance surpassed only by its tonal beauty.

Another important fund drive spanning the years between 1996 and 2004 led to the addition of a wing to Saint Luke School to house the middle school, a science laboratory, several large meeting rooms for parish-wide use and the parish Faith Formation offices. In addition, the existing school was renovated throughout. Classrooms vacated by middle school children became art and computer rooms and an enrichment center for students who need special attention. Saint Luke Schools now has a capacity of 250 students and will continue to remain at that level which the staff and facilities can properly support.

Slideshow of Church Construction and Dedication Photos - below