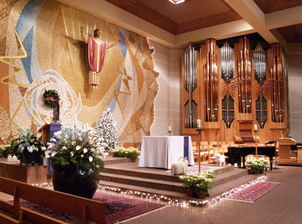 Born in Oak Lawn, Ill., Father Guest earned a bachelor’s degree from Loyola University with a double major of Biology and Theology and also holds a master’s degree in Hebrew Bible from Vanderbilt University in Nashville, Tenn. After holding various jobs in Chicago, he entered Mount St. Mary’s Seminary in Emmitsburg, Md., graduating in 1994. His diaconate assignment was at St. Lawrence the Martyr Parish in Alexandria. Fr. Guest was ordained May 21, 1994 and was appointed parochial vicar at St. William of York   Parish in Stafford. In 1998 he was parochial vicar at St. Catherine of Siena, Great Falls and became Parochial  Administrator at St. Theresa in Ashburn in 2002 and Pastor in 2004. During his time at St. Theresa, Fr. Guest oversaw the construction of the parish church, additional parking, and a multipurpose addition to the parish school building.  Personally, Fr. Guest enjoys travel and baseball.

Fr. Joseph Moschetto was born in 1994, to Beth and Tom Moschetto. The youngest of the three grew up eating dinner together with his parents and older sisters, attending church on Sunday and playing lots of sports: basketball, soccer and lacrosse. He attended St. Theresa School in Ashburn and graduated from Seton School in Manassas in 2012. He and his family attended Our Lady of Hope Church in Potomac Falls. Fr. Joseph   finished his degree at the St. John Paul II Seminary in  Washington and studied at the Pontifical North American College in Rome. He served his diaconate year at St.  Anthony of Padua parish and was ordained on June 6, 2020.

MINISTER OF MUSIC AND LITURGY: Paul Skevington
703 356 0670
Paul Skevington is a native of Fort Wayne, Indiana. Since 1993, He has been the Minister of Music and Liturgy at Saint Luke. He was very much involved in the project to secure the very popular 61-rank Steiner-Reck mechanical-action pipe organ, installed in the church in 1998. He has developed a highly acclaimed well rounded sacred music program at the church, with the 35 voice Festival Choir at the center of the musical activities. Under Paul's direction, Saint Luke has become renowned as a superior site for concerts, with the Saint Luke Music in McLean concert series hosting over 18 musical events per year. The church has also served as a superior site for recordings with over 50 CDs recorded in this space. Paul holds degrees in organ performance from Indiana University and a Doctorate degree in Liturgical Music from The Catholic University of America. He is past dean of the Northern Virginia Chapter of the American Guild of Organists, and past chairperson for the National Association of Pastoral Musicians' Section for Organists.

FAITH FORMATION DIRECTOR: Joyce Franklin
703 356 8419
Joyce comes to us from St. Jude Catholic Church in Fredericksburg, VA. At St. Jude, Joyce was hired to create a Faith Formation program for the new Mission Church of St. Jude, which was established as a canonical parish in 2007. This required her to set up a program for students from kindergarten through high school, as well as develop the RCIA program and adult formation. Prior to going to St. Jude, Joyce worked at Holy Family Parish under many hats. She was Director of Religious Education; Director of Adult Education and Spiritual Enrichment and at one point interim Liturgy Coordinator. This very rich background which Joyce brings to St. Luke makes her a gifted member of our staff.

YOUTH MINISTRY DIRECTOR: Tiffany Lambert
703 356 3092
Tiffany comes to us with 18 years involvement in Youth Ministry, beginning with her undergraduate days at Clemson where she studied Philosophy and Psychology. After earning hr Masters in Theology & Catechetics at Franciscan University, her first position in the Arlington Diocese was at All Saints in Manassas. She became Director of Religious Education and 3 years later moved into Youth Ministry while also enrolled at the Dominican House of Studies in Washington, DC. After All Saints, Tiffany spent 4 years at the Diocese as the Coordinator of Hispanic Youth Ministry. At this point her discernment led Tiffany to become a consecrated member of Women Youth Apostles which entailed a 1 year sabbatical from employment. She returned to fulltime youth ministry at Saint Louis parish in Alexandria before coming to Saint Luke.